Not all Cross visitors arrive from Gods’ Hollow. While their points of origin may not be exotic today, they certainly were for their time. Specifically, I refer to the delegates from Japan, a trio of men who arrived in Cross in 1866 when I was recently returned home from the war of the rebellion.

The Japanese men, warriors all, were in search of a small chest which was stolen from their lord’s family early in the middle of the 17th century, and which was reported to be in Cross. With the relaxation of Japan’s strict regulations regarding travel, the men were given permission to carry out the quest to retrieve it.

The chest was indeed in Cross, and it was in the possession of Gilbert Gubar, Esquire, a gentleman of some renown in Boston law circles. He had inherited it from his father, who had purchased the item from one of Cross’ sailing families after they stole it from one of Japan’s smaller islands. Within the chest was a silver heart. Not the shabby, symmetrical heart emblem of Valentine’s Day, but an anatomically correct organ wrought perfectly.

It was the heart of a grand patriarch, and the lord’s family wanted it back.

For several hours we negotiated with Mr. Gubar for the heart. The gentleman saw, however, that the warriors were intent upon obtaining the item at any cost, and so he continued to raise the price. In the end, it was worth far more than he understood.

The warriors returned home with the patriarch’s heart and Mr. Gubar’s head.

In the late 1890s, I traveled to Copenhagen in Denmark at the request of my cousin, Magdalena Blod. No one had heard from the Danish line since the early 1750s, and while there was a subdued air about the letter, her name was signed and underlined, an old and subtle message of distress.

The voyage from Cross to Denmark was arduous, undertaken during the worst of the Atlantic storms. Several passengers died along the way, one by my blade before I threw him overboard for lacking a civil tongue.

In Denmark, I found my cousin at the University of Copenhagen, a prisoner to a professor who had discovered her longevity. He had overseen the writing of the letter, making certain there was nothing remotely close to a cry for help within her beautifully crafted sentences.

Magdalena welcomed me in and introduced the professor as a man of foresight and power, both of which were keywords. Only King Richard of England had once been referred to as such, and that was after he had put our great-grandfather to death.

I smiled, nodded, and drove my knife up into his heart.

Magdalena and I spent a pleasant evening in the man’s rooms, enjoying dinner while destroying all evidence he had gathered about our family.

Thayer Blood was the ultimate athlete. Regardless of the sport, Thayer excelled at it. His favorite, however, was American football. Only in football, according to my cousin, was he able to unleash his pent-up frustrations, to exact a sort of revenge against the world.

He likened it to gladiatorial combat, where he and his teammates were performing for the benefit of a Caeser and Rome’s finest citizens.

Soon, though, my cousin took this comparison too far.

The violence of football no longer quenched the bloodlust raging within him.

In 1915, eager to sate his need, Thayer joined the Canadian Army and was shipped to the Western Front in Europe.

But there was not enough of the war for him. Too much time, he wrote me, spent doing nothing. He began to raid at night, on his own, questing not only into the German lines but into the defenses of other units on either side of his.

In May of 1916, he vanished completely into the wasteland between the lines, and a letter was sent to me, asking for help in locating Thayer.

I agreed, and with permission from my own officers, I sought my cousin out.

I found him, ecstatic with bloodlust as he reigned supreme between the lines, killing anyone who stumbled upon him, or upon whom he stumbled.

He attempted to collect my head, so I was forced to mail his home to his mother.

She was dangerous and half mad. The product of a father poisoned by lead, and a mother to whom the fey spoke.

Her name was Patience Blood, and she was a woman I loved dearly. She was my cousin, the elder by ten years, and the universe revolved around her as far as I was concerned. Patience taught me how to move through the woods, how to speak with the fey, and how to listen to the damned as they marched from one place in Hell to another.

I last saw her in 1930, when she walked out of the depths of Gods’ Hollow. There was a strangeness to her then. The way she spoke was frightening, almost devoid of emotion as she related her tales. Her smile was true, though, and when she asked me to walk with her to the family burial ground, I felt an old and almost forgotten thrill.

At the graves of our ancestors, I helped open a small crypt half-buried in a hill. Once there, she gave me a kiss goodbye and a lock of her hair. She disappeared into the crypt’s darkness without a word. I sealed the door closed behind her the same way.

Late at night, as I lay in my bed, I can hear her walking with the damned.

I have done my share of hunting. As a young man, it was necessary. Occasionally, over the years, I have gone afield to hunt game, when the desire for venison or waterfowl has taken hold of me.

In 1927, however, I spent the better part of a summer hunting down the Spahis.

I believe this particular group slipped into Cross via Gods’ Hollow. More than likely, it was done with the help of my dead mother, wretched woman that she was.

The Spahis ranged out from the Hollow and into the neighboring farms, taking wives and daughters, leaving any males dead in the farmyards.

From June 6th to August 15th, I tracked them down. I killed several on the outskirts of their camp, and by the evening of the 15th, I fought my way into their tents. Most of the men were dead. Those who were not fled into the Hollow. While I was victorious at that moment, I would not be free of the Spahis completely for another month.

In among the tents, I found the kidnapped females, all of whom were pregnant with the children of the Spahis dark and foul Gods. The tongue of every prisoner had been torn out in order to silence their agonized screams. Some of the prisoners were mad from the pain. Others knew exactly what was coming.

I killed the prisoners, putting a shot through each head and one through every fetus. Then, I set fire to the tents and went to hunt down those who thought they could escape.

Francis Coffin was a hell of a man.

When he realized he would live longer than most, Francis went on a drunken bender that lasted from 1843 until 1901. How many men, women, and children he killed, well, none of us will ever truly know. I have heard tell that he slew entire towns out in the Indian territories and that more than one wagon train vanished because of him. He liked to brag that the Donner Party didn’t get lost, he merely had a fondness for human flesh.

Eventually, in 1901, Francis Coffin had an epiphany. Long life did not translate to immortality. At some point, he might have to pay for his crimes. Thus, began ten years of devout worship at the Cross Congregational Church and good works such as the town had never seen before.

His transformation from hedonistic murderer to self-less advocate for the downtrodden was nothing short of a miracle.

In 1911, Francis was on his way to the Cross Congregational Church to receive an award for his actions. He was traveling along North Road, and it is believed he wandered into Gods’ Hollow, for his body has never been found.

Nor did I want it to be found.

My cousin was a rotten, foul man before he found God.

I gut shot him and dragged him into the basement. It took the bastard seven years to die, and I enjoyed every scream he uttered. 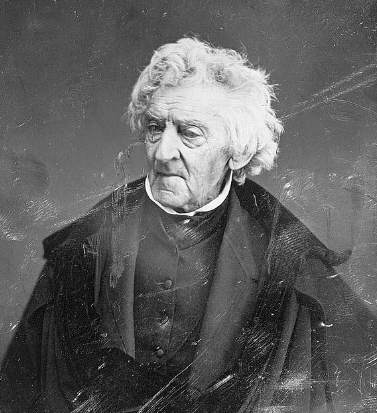 I have no patience for fools.

In 1844, a judge by the name of Abraham Rote traveled down to Cross from Boston. He had heard, in the ways of New England, of the Bloods and their exceptionally long lives. Rote traced his lineage proudly back to Cotton Mather and the hanging judge, Hawthorn, responsible for the deaths of so many witches.

Judge Rote felt it was his responsibility to oust the Bloods as witches, much as his ancestors had done. He came to my farm and spoke with me, explaining clearly his intent. Whether he hoped to frighten me into some sort of devilish confession, or whether he was simply a braggart, I’ll never know.

Judge Rote was one of the few people I personally introduced to the Gallows Tree.

I told him if he would like to see true power, he had best to accompany me. He did want to, and I led him deep into the property. Throughout our journey, he admonished me for my heathen ways, the obvious bargain I had struck up with the Devil, and my need to repent before he convinced a group of my neighbors to lynch me.

I could have let him go, but I did not. The man was a fool, and I do not suffer them lightly.

I left him hanging from the Gallows Tree until his clothes rotted away and freed his bones from their confines. His cloak remains in my hall closet. When the weather is especially foul, I put it on and travel to the Gallows Tree, where I reflect upon the painful and timely death of a fool.