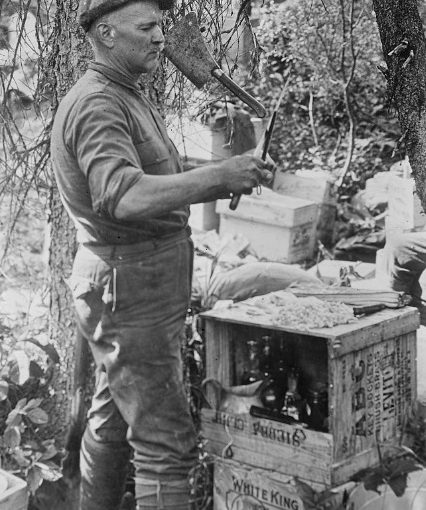 This should be the last recycled post for a bit as I hope to get cleared for work tomorrow. Thanks again for all your well wishes!

There is no other way to put it.

Dark and fell creatures emerge, trying the intellect and strength of the townsfolk. Some people survive the experience; others do not.

Born in 1880, Ian left his home in Cross at the age of 15 and traveled the world. Eventually, he returned to Cross, working as a cook.

On the rare occasion when out-of-towners arrived to hunt some tract of land or hike the wilderness, Ian Dylan would be called upon to cook their food for them. He was a master of creating dishes from what seemed to be nothing more than wild herbs and whatever was brought into the camp.

On February 11, 1925, Ian was with members of the Wheeler family at their basecamp near the edge of Gods’ Hollow. The elder sons and fathers had gone off to hunt for dinner, leaving the younger boys with Ian. Ian had cooked for the Wheelers in the past, so they were familiar with him, and they trusted him.

An act for which the boys’ mothers were eternally grateful.

At five in the evening, when the hunters had yet to return, Ian gathered the younger boys – ten in all – to him, and he spoke of his life to keep them entertained.

It wasn’t until seven that the first of the fathers returned, and he came back dead.

The man’s throat was slashed, and his lips were a bright red, and when he saw the boys, he charged straight toward them.

Ian removed the father’s head with a cleaver, and before the body hit the forest floor, the rest of the hunting party arrived.

For nearly an hour, Ian fought the undead members of the Wheeler family, beating them back and removing heads whenever possible. By dawn, only he and the boys remained.

The fathers and elder sons, all of them, were dead.

Ian Dylan’s body is buried in the private graveyard of the Wheeler family, and it bears a single inscription.